Sri Lanka’s gross domestic product (GDP) is likely to grow a further 7.0 percent by end-2016. Interestingly, the services sector contributes the lion’s share, 61 percent, to GDP. With strong growth in the services sector in the recent past, it has managed to create noticeable employment opportunities, helping public wages and salaries rise sharply. As per Sri Lanka’s Department of Census and Statistics (DCS), the estimated average household income per month at national level was Rs.45,878 in 2012/13 in Sri Lanka. Mean estimated household income increased by 25.9 percent from the previous survey year (2009/10) respectively.

Colombo, the largest city and commercial capital of the country, since 2009 has seen improved confidence in the investment market which triggered an escalation in property values. Apart from the various infrastructure projects, an increased migration to Colombo (both from the rural areas and from outside the country) have emerged as the reasons behind real estate price rises.

The rising number of high-net-worth individuals and other income segments resulted in a growing demand for housing. To fulfil the demand, developers continued acquiring land within the central and secondary sub-markets. Due to the limited availability of land in the city, select locations within the central and secondary sub-markets saw faster growth in land prices of around 7-8 percent on average annually. 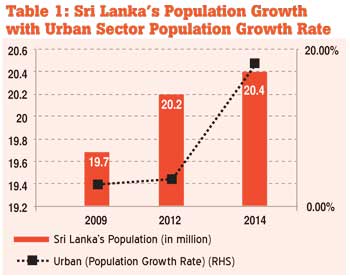 Increasing construction costs, high borrowing costs have made apartment prices unaffordable. As a result, the apartment market is largely restricted to only high-income-earning resident Sri Lankans (RSLs), non-RSLs and foreigners.

Cost of the house
While assessing the affordability of the buyer, the cost of the house should consider not only the purchase costs of the dwelling unit, but also the maintenance costs.

Location of the house
An affordable housing project should be located within reasonable distances from workplaces and should be connected adequately through public transport, since housing plus transportation costs will greatly affect affordability.

According to Sri Lanka’s Urban Development Authority, in government promoted schemes, the number of affordable houses is going to double. Population migration from the rural areas to the city suburbs is expected to grow; however initiatives taken by the government may not be sufficient.

The following aspects could be considered to revive the segment on affordable real estate:

Housing needs of the economically weaker segment could be fulfilled if well-rounded efforts are made by the governments and private builders. This will not only create the synergy in real estate prices but also create the possibility of balancing the ecosystem of the city.
(Gagan Singh is the Chairperson of Jones Lang LaSalle Sri Lanka)